Roo Vandegrift was born in the Appalachian mountains of southwestern Virginia, but spent most of his childhood as an Air Force brat. He grew up in a succession of remarkably similarly boring military bases, set in remarkably interestingly diverse locations around the world, before his parents settled back in Virginia. Roo completed his undergraduate work at Virginia Tech, in Dr. Robert H Jones’ soil ecology lab, and then worked for several years at a venture capital funded biotech company, where he learned the meaning of “cut-throat” and “exit strategy.” Moving back to his roots, so to speak, he took a lab technician job with Dr. Brenda Casper at the University of Pennsylvania. There, he decided that he really did like fungal ecology enough to start a career in the field.

Roo recently finished his PhD in Dr. Bitty A Roy’s lab at the University of Oregon, with a fair bit of shared advising by Dr. George C Carroll. He received the NSF GRFP in 2011, and the MSA Graduate Fellowship in 2013, in addition to small awards from the Sonoma County Mycological Association, the Cascade Mycological Society, and the Mycological Society of San Francisco. Also in 2013, he participated in NSF’s East Asia and Pacific Summer Institute (EAPSI) program in Taiwan, where he was able to work with the incomparable taxonomist Dr. Yu-Ming Ju.

In 2014, MSA graciously awarded him the Mentor/Student Travel Award in honor of Dr. Alexopoulos, which allowed him to come to East Lansing for the meeting. Roo’s research is varied, but is tied together by endophytes, the fungi that live asymptomatically in the leaves and other tissues of plants. He presented two talks, the first about the role of a host-specific Epichloë endophyte in the invasion ecology of a noxious invasive grass in the Pacific Northwest. The second talk was about dispersal of Xylaria endophytes in tropical systems, and presented preliminary data from the previous summer in Taiwan. He was awarded the Best Graduate Student Oral Presentation for his talk on the Epichloë/invasion ecology work, and the paper resulting from that project was recently accepted for publication in Biological Invasions. Many intense conversations at the meeting, on topics ranging from the role of endophytes in tropical ecosystems to the intricacies of sequenced-based identification of fungi and the vagrancies of next-generation sequencing, made quite an impact on how Roo thinks about his data, and the way in which he is analyzing his Illumina meta-barcoding dataset from Taiwan.

Since graduation, Roo not to immediately start seeking a postdoc. He is, instead, working on a thoroughly illustrated treatment of the Xylaria of the cloud forest of Ecuador, which gives him an excuse to spend time drawing pictures of some the most morphologically interesting fungi in world. He expects to be actively seeking postdocs for 2017, in projects that will allow him to continue practicing illustration as well as mycology. Roo has a particular interest in the taxonomy of neo-tropical stromatic ascomycetes and wood-rot fungi, as well as the ecology of symbiosis, particularly endophytism. 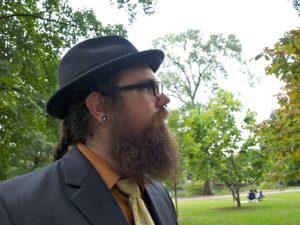